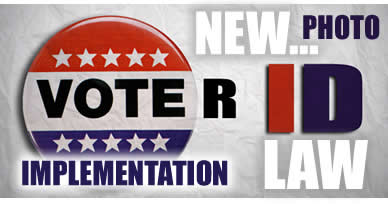 During the 2011 Regular Legislative Session the Legislature approved House Bill 19. Governor Robert Bentley signed the bill and it was subsequently assigned Act Number 2011-673.

Beginning with the June 3, 2014 primary election, Act 2011-673 requires an Alabama voter to have a specific type of photo identification at the polls in order to vote. If a voter does not have one of the approved forms of photo ID as stated in the law, then he or she may receive a free Alabama photo voter ID from various locations including the Secretary of State’s Office, local county board of registrars’ offices, and a mobile location to be determined by the Secretary of State’s Office.

Valid ID at the Polls

A voter can use any of the following forms of photo ID at the polls:

If a voter possesses any of these forms of ID, he/she is not eligible to receive a free Alabama photo voter ID card. The voter must bring one of these photo IDs to the polls on Election Day or place a copy of the ID in absentee ballot materials.

A voter who is required to present valid photo identification but who does not do so will be allowed to vote a provisional ballot as provided for by law.

In addition, a voter who does not have a valid photo ID in his or her possession at the polls shall be permitted to vote if the individual is positively identified by two election officials as a voter on the poll list who is eligible to vote and the election officials sign a sworn affidavit so stating.

Questions about the voter identification requirements may be directed to the Elections Division by email or by phone (242-7210, in the Montgomery area; or statewide at 1-800-274-8683).

The Office of the Revenue Commissioner

The Office of the Pike County Circuit Clerk